The history of steel dates back to the 18th century, which is when steel finally made its debut as a popular building material. Back then, there were three types of materials using iron. Wrought iron was first and the most popular. It was typically used for gates and railings or doors because of its low price and wide availability. Cast iron was another option but it failed as a structural material. Cast iron was mostly used in machinery and cooking materials. And then finally there was steel, which was quickly considered a premium material and as such was the most expensive. It was used for items like watches and swords. That all changed in the early 1800s when the invention of the railway revolutionized trade and industry.

History of Steel vs Iron The railway revolution necessitated a similar revolution in building materials. Rails required a metal that was both strong in tension and compression and steel met both requirements. The problem was the cost to produce steel had to be lowered in order to justify its use. Essential advancements provided the means to cheapen the mass production of steel, allowing it to replace wrought iron as the most widely used material. The key players of these advancements include:

Prefabricated structures became popular among gold rush pioneers later in the 19th century, who used prefabricated iron buildings; these buildings were the predecessors to the pre-engineered steel buildings we are familiar with today. These iron structures could be ordered by catalog and ranged in size from small residential structures to larger buildings such as churches or theaters. The idea was to provide easy-to-assemble upgrades to the tent settlements that were common at the time.

Toward the end of the 19th century is when steel truly started to may its way into permanent structures. The final push towards steel was the Great Chicago Fire of 1871 – flames had easily ripped through the wooden structures of the city, leaving Chicago charred and devastated. It was time to find a fireproof material to better protect structures within the U.S. When the city was rebuilt, it was done with much stricter standards than required non-combustible materials like steel. Steel framing was light, durable and fire-resistant, which soon made steel frame buildings the new standard across the entire United States.

Like any problem that comes about, a solution can most likely be found if given proper consideration. Gregg considered this repeating issue and went to work to find a solution. He developed and patented a steel truss building design with which he hoped to compete with the price of wooden structured pole barns. The idea was obvious: provide a steel building structure that customers can buy for roughly the same price as a wooden pole barn structure. And that’s exactly what his new, genius design did. 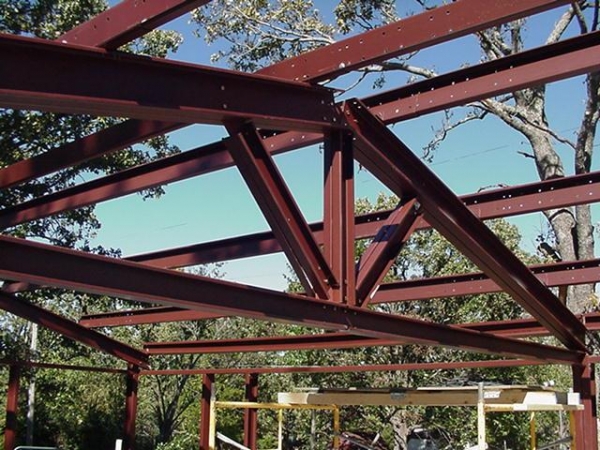 Simpson Steel Building Company’s patented steel truss frame design allows for a significant economic advantage. In our past, our industry had lost all the 50-foot wide and under business to the wood frame pole barns. With Simpson Steel Building Company’s steel truss frame, we can offer a far superior structure at the same price or slightly higher price than even the cheap lumber yard packages. Thanks to Gregg Simpson, no longer was the price for a steel building kit so high that customers were forced to buy a wooden pole barn structure. Now you can have the best of both worlds: a great steel building at a great low price!

Since then, we here at Simpson Steel Building Company have had one mission: to show the world that steel buildings can be found at economical prices while still providing one of the best steel structures available. We want to help customers understand that they are not stuck with the unfortunate options of building a wooden pole barn structure to save money or spending more money than necessary on an I-beam steel structure – the steel truss frame that we provide is one of the best options available. Request a steel truss frame quote for your next building project today.